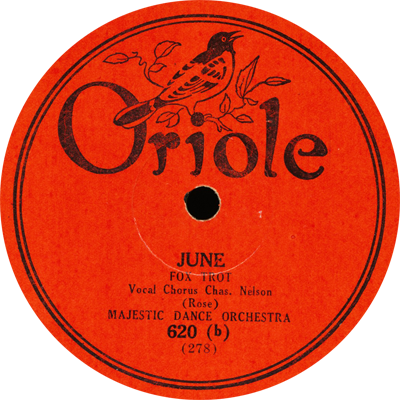 Shellac Stack No. 40 comes along and shakes that thing with songs about June, Dragnet, skirts, and much more! We tip the hat to summer ragtime piano festival season with records from Lee Stafford and Wally Rose, and we listen to songs from the Bing Crosby film Two For Tonight. 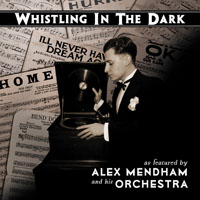 One record in this week’s stack, “Whistling in the Dark” by Eddie Lane’s Hotel McAlpin Orchestra is played in honor of the recent CD release on Rivermont Records, Whistling in the Dark by Alex Mendham’s Orchestra. I had the great privilege and honor of traveling to London in September 2012 to record the Orchestra–one of the best 1920s and 1930s-style dance orchestras you’ll hear anywhere. The CD features 20 top songs of the late ’20s and early ’30s and if I do say so myself, it’s a marvelous disc. Don’t take my word for it, though, click here and scroll to the bottom of the page to read Malcolm Shaw’s review in the current VJM. If you buy it from Rivermont, your purchase will not only get you the CD for yourself, but you’ll also be supporting the Shellac Stack. And thanks to a gift from an generous anonymous donor, Rivermont has even slashed prices on international delivery to well below cost! Just click on the album cover at right or on the link below to read more about the CD, listen to samples, and order your copy. Thanks!