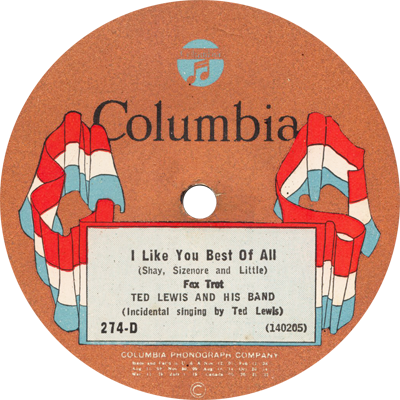 Shellac Stack No. 54 celebrates the 125th birthday of Ted Lewis with several of his early jazz records. We take a brief trip to Hawaii, listen to some “Sugar” songs, and relax with vocalists “Whispering” Jack Smith, Jane Green, and Peggy Lee. 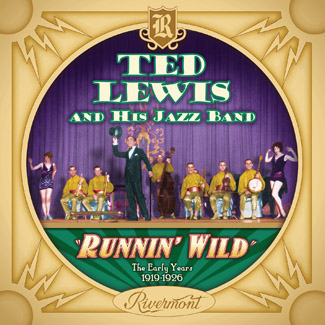 This week marks the release of Ted Lewis: Runnin’ Wild (The Early Years, 1919-1926) on the Rivermont label. It’s the first-ever CD retrospective of Ted’s years as leader of a “hot” jazz band, a group formed in the late 1910s to rival the Original Dixieland Jazz Band. The 40-page booklet is packed with never-before-seen photos from the Ted Lewis Museum and a detailed account by Mark Berresford of Ted’s early career, from his first days in Vaudeville through his initial success as the “King of Jazz” (before Paul Whiteman!) in the early ’20s. The CD also includes 6 previously unreleased recordings taken from unique test pressings from Ted’s own collection. The music is fresh, vibrant, and exciting, and it may have you reconsidering what you thought you knew about Ted Lewis. I may be biased since I had a hand in its production, but I highly recommend this CD. Your purchase of the disc directly from Rivermont Records will also help keep the Shellac Stack going. Thank you for your support!