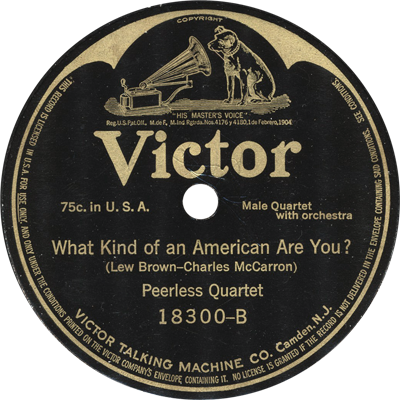 Shellac Stack No. 75 has the audacity to suggest that “It’s a Sin to Tell a Lie.” We hear a 100-year-old patriotic record, and listen to songs about fools, strawberries, and “winin’ boys.” The artist roster ranges from Frank Luther to Andres Segovia to Orrin Tucker to Jelly Roll Morton and beyond.

CORRECTION: In the program, I misattribute Jelly Roll Morton’s “Winin’ Boy Blues” to the famous Library of Congress sessions with Alan Lomax. I made that call after looking at incomplete discographical data that showed the record to have been made in December 1938 in Washington, DC without specifying an exact location. Although Morton was making his LoC recordings in DC in December 1938,  “Winin’ Boy” was, in fact, recorded at a separate session at the “United Sates Recording Company” in the Rialto Theater Building at 9th and G Streets NW in Washington, DC. Thanks to Roger in the UK for pointing this out.