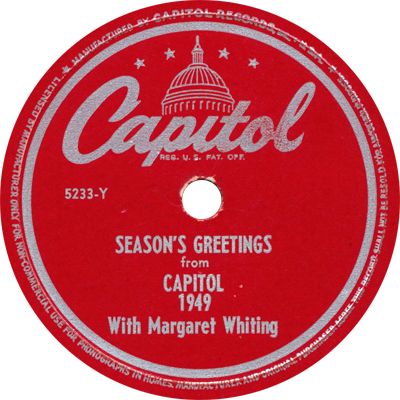 Shellac Stack No. 43 starts out with a special Christmas promo disc from Capitol in 1949 then brings you an assortment of musical delights ranging from Don Redman and Duke Ellington to Zez Confrey and Jan Garber. We throw in some hot Western Swing for good measure and pause to ask “Have you met Yvette”?

As it turns out, I never met Yvette, and in the program, I wondered who this Bluebird Records singing star could have been.  Thanks to super sleuthing by listener Neal in New Jersey, we have an answer. She was 18-year-old Elsa Harris (a.k.a. “Elsa Silver”) of Birmingham, Alabama. Read more about her in this May 18, 1941 newspaper article. Neal also notes that Harris was one of 15 survivors of a plane crash just outside Lisbon, Portugal on February 22, 1943 while on a USO tour — the same crash that seriously injured Jane Froman and that killed Russian singer Tamara and Roy Rognan of the dance team Lorraine and Rognan. Though Harris was not seriously injured, she suffered a “delayed reaction” and collapsed six months later. She later recovered and married Herb Gottleib in 1947.  Thanks to Neal, we also have this picture of Yvette from the cover of the Radio Mirror. Thank you, Neal! (P.S., Here’s another interesting newspaper write-up on Yvette from 1944.)